This week’s Designer of the Week is Karey Solomon.  Karey is a prolific author, with 28 published books.  Below this blog post is a list of all her works, so you can find them at the Tatting Corner easily.

Karey has kindly given us a look into her Baubles, Bangles, and Beads book, with the following: 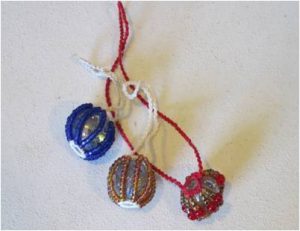 You will need one gem  – you also could use a marble, too, but this looks even more interesting with a gem – and  about 4 yards of size 20 cordonnet thread, on which 72 beads have been threaded.  Threading pattern, with “o” signifying a size 10 or 11 bead and “0” as a size E (6) bead is  (oooo0oooo) eight times.  Note: the pattern is for the bauble made with red thread on the right.  The blue and copper-colored baubles are the “caged” marbles, also in “Baubles, Bangles and Beads.” ©

Wind first nine beads onto the shuttle with the first part of the thread; then wind most of the remaining thread.  The next  54 beads are used in the loop around your left hand for the first R.

Reserve the last 9 beads with about 2 feet of “tail “thread.

Move beads from tail thread and remaining 1/10 of beads from shuttle thread, and tie these two threads together.

Place gem into the bead “cage” and close R

Ornament hanger: LCH:20 or to length needed.  Extra beads may be used to ornament the hanger. Join to opposite side of the last R made, tie, cut and sew in ends.  This also makes a good scissors fob.

Optional – thread on a bunch of extra beads of various sizes and loop them at the bottom for a beaded tassel.

Pattern may be found in “Baubles, Bangles and Beads”

Blog Editor’s Comment:  I met Craig, as she likes to be called, for the first time in 2013, at Tat Days in Greenfield, IN (this was before I purchased the Tatting Corner).  We were in a class with the Shuttle Brothers, and not only was she doing everything they were teaching, she was also in the process of designing her 3D Fairies.  I am in awe of her design skills.  Everyone should own a copy of both of her books (available only at the Tatting Corner)! 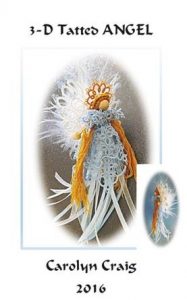 Craig has provided this synopsis of her most recent book, 3-D Tatted Angel: 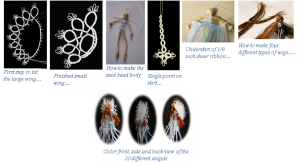